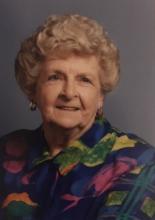 Thelma was born on March 23, 1919, in Oklahoma City to her parents, John Clayton and Nadine Eunice Wetsel Gay. She was part of the first class to attend the new Santa Rita Elementary School and graduated from San Angelo High School in 1936, and later from San Angelo Junior College.

Thelma was a homemaker but was also a talented seamstress. She later worked for Hemphill Wells and Cloth World. She was a member of First United Methodist Church, The Ruth Class.

She was preceded in death by her parents; her husband Clarence; two sons, Gary and Kent Wagner; and a grandson, Jon David Wagner.

Thelma is survived by her daughter Donna Manship of Weatherford; her grandchildren, Melissa Belcher and her husband Mark of Weatherford, Candy Robertson of Stephenville, Kyra Krause and husband Paul of Stephenville, and Philip Wagner of Farmers Branch; and her great grandchildren, Clayton, Collin and Allison Belcher, Kelsi Robertson, Kati, Clay and Chloe Krause, and Jaydee Wagner.

The family wishes to express appreciation to the staff at Sagecrest Alzheimer's Facility, Baptist Retirement Community, Dr. Chris Barnett and Nurse Practitioner, Maegin Carlile for their years of loving care.

To send flowers to the family or plant a tree in memory of Thelma Lee Wagner, please visit our floral store.