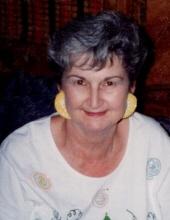 Glenda McClure Smith passed away peacefully at Shannon Medical Center San Angelo on the morning of January 10, 2021 with her family at her side.

Glenda was born on September 9, 1937 in Amarillo, Texas to loving parents Nick Delbert Cooper, Jr. and Lavina Nell Thomas Cooper. She spent her youth in Electra, Texas where she graduated from Electra High School. She married Don McClure in 1954 and they resided at Sunshine Hill. They were married for 34 wonderful years. Don and Glenda were blessed with two sons, Steven Don and Michael Dell. She attended Draughons Business School and worked in accounting for J.C.Penney for many years while Don was employed in the oil fields around Electra. Don and Glenda moved to Odessa to further his career in the oil business. Later they spent several years in England while Don was servicing the oil industry in Africa and various other locations. Glenda started her career in the banking industry in Odessa where she worked for many years and all who knew her loved her. She is predeceased in death by Don McClure in 1988.

She moved to San Angelo, Texas in 1997 and worked in Texas Bank to retirement. She married Carey Smith enjoying a wonderful 26 year relationship. Carey and Glenda enjoyed travelling. They made trips to Alaska, Italy, Hawaii and took several cruises. She took great pride in her associations at Veribest Baptist Church and cherished all her time with her beloved grandchildren and great grandchildren.