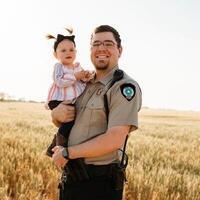 Samuel went to be with the Lord and Savior May 10, 2021 in Eden, Texas.  He was born July 26, 1994 in Lubbock, Texas to Randy and Letha (Lenz) Leonard. He graduated from Klondike High School and attended San Angelo University for a couple of years.  He married Morgan Lea Frierson June 3, 2017 in San Angelo, Texas.  He was a Deputy Sheriff for Dawson County he then transferred to Concho County. He enjoyed photography, grilling and was a firearm enthusiast.  He was known for making everyone laugh and loved playing with his daughter. He grew up attending First Baptist Church of Lamesa. He was an Eagle Scout of the Boys Scouts of America and a member of the Milam Masonic Lodge #11.

Samuel is survived by his wife, Morgan Lea Leonard and daughter, Magnolia Rae Leonard both of Lamesa; parents, Randy and Letha Leonard of Lamesa; brothers, Zach Leonard and wife, Rebekah of Lamesa and Jacob Leonard of Tacoma, Washington; sister, Tiane Garner and husband, Christian of Lacey, Washington; grandparents, Richard and Virginia Leonard of Lamesa and Lloyd and Elva Lenz of Johnson City; and father-in-law and mother-in-law, Randall and Tracy Frierson of Haskell. The family suggests memorials to a charity of your choice. To send condolences, online please visit www.branonfuneralhome.com.