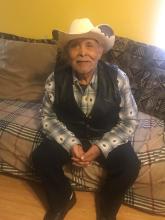 Jose Guadalupe Cruz Jaquez, age 76, entered the gates of Heaven on Thursday, September 9, 2021 in San Angelo surrounded by his family.

Jose was born September 23, 1944 born in El Duranzo, Chalchihuites Zacatecas, Mexico to his parents Esteban Cruz and Gregoria Jaquez. He enjoyed spending time outdoors with the farm animals and loved riding horses. He was a long time member of St. Joseph Catholic Church. He was a very independent man, who adored his family and his dog Cholo. He had a very strong character and he was always there no matter what. He always took pride in helping everyone around him. He was someone you could always count on. He will be deeply missed by his loved ones and friends.

Jose was preceded in Death by a son, Victorino Cruz; sisters, Lionela Cruz and Manuela Cruz; by his brothers, Esteban Cruz and Salvador Cruz; and by grandchildren- Alejandro Cruz and Rosa Cruz