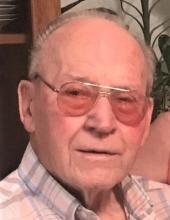 Lawrence was born in Floydada, TX, June 14, 1934 to Richard and Mamie Stovall. He married the love of his life, Carolyn Trapp, on September 16, 1954 in Floydada, TX. They shared 67 years together while raising their four children and enjoying their eight grandchildren and 16 great grandchildren. Lawrence was a member of Sierra Vista United Methodist Church and previously served as a Board Director for Grape Creek United Methodist Church and was a former member of Floydada United Methodist Church. Lawrence’s faith was expressed in the love he showed his family and friends and his service to others. Lawrence boxed in high school and was Golden Gloves Champion. He was a Master Mason and member of the Floydada Masonic Lodge #712 for 65 years. He was elected to the Floydada ISD Board of Trustees and served several years in the 1970s.

Lawrence graduated from Floydada High School in 1951. He began his 44 year career as a groundman for a construction company then started as a lineman with Floydada’s Lighthouse Electric Cooperative. In 1970, he became the Electrical Superintendent with Floydada Power and Light. Juggling work, school and family, Lawrence earned an associate degree in teaching from the Texas A&M University. In 1974, he became a job training specialist for Texas A&M and ultimately manager of the A&M West Texas Regional Training Center. In five short years, Lawrence taught electrical safety at almost 40 of the then 76 cooperatives in Texas. In 1979, bringing a wealth of experience and knowledge, Lawrence joined the Concho Valley Electric Co-op as line superintendent and safety coordinator.

Lawrence’s career is well decorated with recognition for his commitment to job safety and training. He received the 1993 Ray Pantel Meritorious Service Award, the highest award presented by he Texas Job Training & Safety (JT&S) Advisory Committee of the Texas A&M University System. He was elected and served two terms on the Executive Committee of the National Utility Training and Safety Education Association and three terms on the Texas JT&S.

Lawrence is survived by his wife, Carolyn, and children, Terry Marricle and her husband David of Muleshoe, TX; Larry Stovall and his wife Rhonda of Floydada, TX; Beth Fleming and her husband Gayland of Krum, TX; and Susan Ball and her fiancé Kerry Curnutt of San Angelo, TX; and grandchildren, Amy Hasty, Ryan Marricle, Dustin Fleming, Travis Fleming, Rachel Penko, Cody Stovall, Kayla Dunlap and Bradley Ball. He was also loved and adored by his 16 great grandchildren. Lawrence was preceded in death by his parents Richard and Mamie Stovall, brother JT Stovall and 3 sisters, Dorothy Turner, Mildred Kinard, and Fern Anderson. He was also preceded in death by his son-in-law, Guy Ball and his great grandchild Emmet Reid Marricle. Lawrence will be greatly missed and our memories will be forever cherished.

Lawrence will be remembered at a funeral service at Sierra Vista United Methodist Church on Wenesday, October 13, 2021, at 2:00 P.M., with Rev. Stan Whites officiating. Interment and Masonic service will follow at Lawnhaven Memorial Gardens, San Angelo, TX. The family will receive friends for visitation from 5:30 P.M. – 7:30 P.M., Tuesday, October 12, 2021, at Harper Funeral Home.