2021 Shrimp Fest Sept. 25 in Kirby Park is All You Can Eat! SAVE on ADVANCE TICKETS

WASHINGTON, D.C. – The U.S. Senate has unanimously approved an amendment to the pending Bipartisan Infrastructure Package expanding the congressional designation of Interstate 14 on a corridor across Texas, Louisiana, Mississippi, Alabama and Georgia. I-14 will route through San Angelo, becoming a major east-west interstate corridor through the Concho Valley. I-14 will likely be joined by a north-south interstate system called I-27, also routing through San Angelo.

The Interstate 14 amendment was offered jointly by Senator Ted Cruz of Texas and Senator Raphael Warnock of Georgia. The full I-14 congressional designation was supported by all 10 senators along the corridor which runs from Midland-Odessa, Texas to Augusta, Georgia. The designation was approved earlier in the U.S. House and has the support of every House member whose district is on the I-14 route. 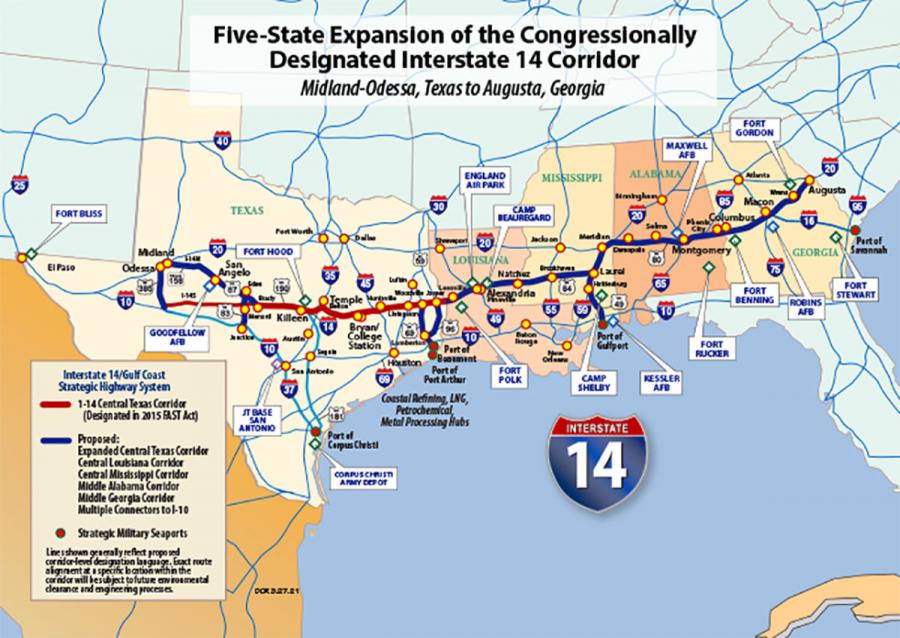 The I-14 routing through five U.S. states that also routes through San Angelo and the Midland/Odessa areas.

“We expect that the Senate infrastructure package will be voted on soon and sent to the House for consideration. It appears the momentum is in place to get this passed and signed by the President,” said John Thompson, chairman of the I-14/Gulf Coast Strategic Highway Coalition which has been building grassroots support for I-14 over the past decade.

In Texas the I-14 corridor runs from Midland-Odessa to San Angelo, Killeen-Fort Hood, Bryan-College Station, Livingston, Woodville and Jasper. Moving east the designated I-14 corridor connects Fort Polk-Leesville, Alexandria-Pineville, Louisiana; Natchez and Laurel, Mississippi; Selma and Montgomery, Alabama; and Columbus, Macon and Augusta, Georgia. Four spur interstate routes connect future I-14 to I-10 in Texas and Mississippi. The designation includes an interstate loop at Bryan-College Station.

Chairman of the Ports-to-Plains Alliance John Osbourne talks about the interstate highways proposed through San Angelo.

“I applaud my Senate colleagues for supporting this bipartisan amendment to designate future Interstate-14 across Texas, Louisiana, Mississippi, Alabama and Georgia, so we can begin the necessary work to upgrade this road system and connect strategic military installations across our states,” said Senator Cruz. “I am grateful to Sen. Warnock for joining me in leading this effort to ensure Texans and Georgians have the crucial infrastructure they deserve and reap the benefits of the economic development and growth that come along with it.”

Senator Warnock said that he is proud to have worked together with Senator Cruz to win Senate approval. “This planned route would connect military installations across Georgia and drive economic opportunities to our rural communities,” he said.

“The I-14 corridor will cover more than 1,300 miles. Congressional authority for new interstate highways of this length are very rare,” said Coalition Chairman Thompson. “The leadership provided by Senators Cruz and Warnock and our other senators was essential to this major step in advancing Interstate 14 as a future corridor for handling freight movement, military facility connectivity, coastal evacuation and sparking economic development.”

Thompson offered his special thanks to Congressman Brian Babin of Texas who has been the lead sponsor in the House of I-14 designation legislation over a period of several years.

Thompson also thanked local community leaders across the five states for their persistent efforts to build and maintain state and local support for the new interstate corridor. Their efforts were responsible for gathering the written support from state departments of transportation and regional transportation planning agencies that was required by congressional committees dealing with the proposed I-14 designation.

He noted that this authorization is only the first step in a decades-long process of building out I-14. Supporters must now shift to working to win funding for planning and construction of projects on the corridor, work that must be done with Congress, the U.S. Department of Transportation and the departments of transportation in each of the states along the I-14 corridor which are responsible for building highway infrastructure, he said.

In 2015, Congress designated the Central Texas Corridor as future Interstate 14. The first 25-mile section of the Interstate 14 highway – connecting Fort Hood and Killeen to Interstate 35 at Belton – was added to the Interstate Highway System in 2017. Thompson pointed out that completing the interstate linkage between a dozen military facilities across five states will add to the military value of each of these installations.

Upgrading existing highways and spurs will provide greater freight movement efficiency in each state and nationally. It will add much needed additional roadway capacity parallel to I-10 and I-20 across each of the five states.

I-14 will also provide important natural disaster evacuation capacity along the Gulf Coast and a high elevation alternative to I-10 which is periodically damaged and out of service by hurricanes, flooding and maritime events.

The I-14 corridor in almost all cases follows and would be an upgrade of existing highways. Starting in West Texas the corridor follows SH 158 and US 87 from Midland to San Angelo and Brady then runs east on US 190 to tie into the existing section of I-14 at Killeen. It then generally follows US 190 to East Texas, crossing the Sabine River near Fort Polk at Leesville, LA. In Louisiana the corridor generally follows LA 28 connecting Leesville, Alexandria and Vidalia. In Mississippi the corridor starts at Natchez and runs east following US 84 to Laurel. It runs concurrently on I-59 to Meridian and then generally follows US 80 to Montgomery, Alabama, Columbus, Georgia, and Fort Benning. From there it follows existing routes to Warner Robins, Macon, Fort Gordon and Augusta. Spur routes connect to I-10 in West Texas, at Beaumont, Texas, and at Gulfport, Mississippi. (See attached graphic).

In San Angelo, Tom Green County Judge Steve Floyd is a voting member of the Coalition Board. City of San Angelo economic development director Guy Andrews is an ex-officio member.

Here are the Coalition Board Members for 2021:

And with all the new development that accompanies the increased traffic flow, just where is the water going to come from in the dryer years? I predict that clean, potable water will be worth more than gold in a few short years. Only time will tell.

Once again San Angelo has to play second fiddle.

What happened to the first proposed route straight from Lubbock ?

That's an easy answer. Because San Angelo is included in a district that in includes Midland/Odessa.

We used to be in Abilene's district and got shafted there as well.

San Angelo and surrounding cities should be in a district of our own. San Angelo will never get it's due having a senate  representative  from another city. Until district lines are redrawn with San Angelo in its own district we will always play second fiddle to other cities.

Mark my words. Midland/Odessa will get their interstate built before any work begins here.

Mark my words.. screenshot this message if you must..This Inerstate Hwy will bring more crime and drugs , like San Angelo has never seen before....
Permalink

No it won’t. You old people say crap like that all the time. Nothing but worried warts on your own butts. Town I’m from had an interstate included. Crime was no different. Crime goes where it wants and how easily it can operate. You’re probably not even following current crime or how it works between the counties.